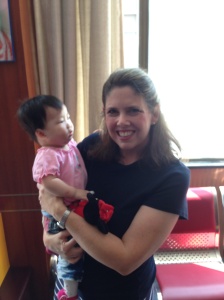 We met Maggie on September 16, 2013, six months ago today. She was 13 months old and had very little strength and few skills aside from rolling over and sitting up. She couldn’t bear weight on her legs or her knees, couldn’t grasp a piece of food in her hand, and couldn’t find her own mouth to feed herself. She slept a lot and was silent most of the time.

It is incredible to reflect on how much she has changed in every way–physically, cognitively, emotionally, and inter-personally. When I look back on the photos of her first days with us I don’t see the same sparkle in her eyes or the joyful exuberance toward life that she displays today. But she was sweet and cheerful, gentle and smart–those things have not changed.

She is proud of herself!

A friend told me once that it would be such a waste if she were still languishing in a Chinese orphanage, and I couldn’t agree more. She has so much personality, so much potential, so much value–what a blessing it has been to help her discover that! 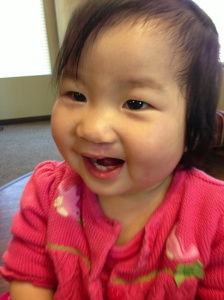 A lot has happened since I posted her 5 month update. I need to try and find more time to post, as she is changing so quickly now–but therein lies the difficulty! She is getting busier and I find less time to write.

Maggie has been meeting with the physical therapist for three weeks now. Every time we see the PT Maggie shows that she has made progress, and she grows by leaps and bounds during each PT session. The PT shows her what her body can do, and she gains confidence and wants to try out her new skills. She is easily pulling up to stand from a bench seating position now–she likes to sit on a little chair that she has and pull up using the slats on her bed.

She is also able to get up from flat on the floor, though that is a little harder. Sometimes it is hard to get her feet under her and she pulls up onto her knees instead. This is progress for her, though, as six months ago she was unwilling to bear any weight on her knees without crying. Now she enjoys sitting on her knees and can often be found getting into the crawling position all on her own (although she still is not crawling!)

Maggie is the fastest little bottom scooter you ever saw. She feels she has no need for crawling since she can get everywhere she cares to go at lightning speed by scooting along on her rear end.

She is starting to hold hands and take steps and now that she knows how to do that she wants to practice all the time. Whenever I go to put her down she straightens her legs to try and force me to set her down in a standing position rather than a seated one. Her gait is rather robotic as she doesn’t bend her knees much. She is starting to creep a little, when prompted, using furniture to move a little bit further to reach a desired toy. She is somewhat fearful of falling so she doesn’t initiate creeping on her own yet, but she grows bolder every day. 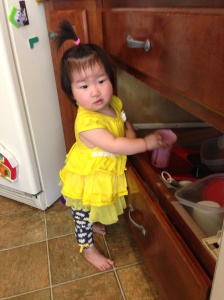 She can maintain a standing position without holding on to anything if she is able to lean against something (either a wall or a chair behind her or a drawer or table in front of her). She forgets to hang on sometimes when she gets busy playing.

She has learned to put a ball on her little tee and hit it off with a bat. Whenever she does this she puffs up her chest, so proud, and looks to see who is watching.

Maggie has put on an incredible six pounds in the past six months. 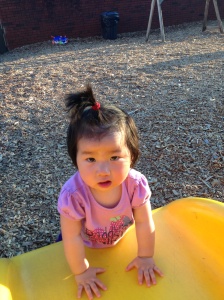 Maggie has gotten much more comfortable pursing her lips, and often says “mmmm” when something tastes good or she wants something. She still coughs to indicate that she wants a drink, but I am trying to teach her a sign for “thirsty”. She gives “high five” when prompted, and responds to many simple commands even when we make them without gestures. She is aware when we are talking about her and she perks up and pays attention. She says “mama” and this week she said “uh oh” and “hey” (a common Southern greeting). She has many ways of making her will known even though she is unable to express it. She likes to give me things so she takes my hand, opens my palm and places the object in my hand, for example. When she couldn’t find her baseball tee this week she grabbed the bat and ball and held them out to me so I would know she wanted me to find her tee. 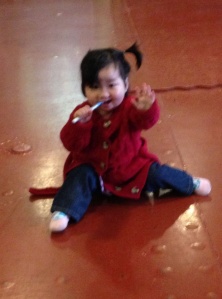 One thing we have been working on for speech is getting her to be less sensitive in her mouth and face. Initially she would immediately brush my hand away any time I touched her face. She also never mouthed anything and did not want anything aside from food in her mouth. She was also unwilling to take a sippy cup.

Now she has become more tolerant of me touching her face, and she enjoys putting things in her mouth. The speech therapist gave me some tools to help desensitize her mouth–at first (2 1/2 months ago) we had to work on getting her to let them touch her lips, but now she will hold them in her mouth for several minutes. She is putting more things in her mouth, which is a good thing–she has to go through the stages she missed as a little baby.

She has started indicating that she wants tastes of our drinks and this week I gave her a sippy cup and within a couple minutes she had learned how to drink from it all by herself. We will keep her on the bottle, too, until after her palate surgery in May. Maggie is babbling a lot more, and has gotten so noisy that she can’t stay in the church service after the singing ends. For the first few months she could be silent for hours on end, but now she makes her presence known.

She has also gotten two more new teeth this month, both on bottom.

Maggie will have her first appointment with the occupational therapist on Monday. It took a long time to get in with the therapist, and she was only approved for meetings once a month since she isn’t very delayed in her fine motor skills. She is getting better at doing shape sorters and puzzles, but she still has a ways to go.

When we went to the beach a couple weeks ago she wasn’t sure what to think of the sand, but within a couple days she was digging with her shovel.

We have had a much better month with Maggie’s sleeping. Most nights she doesn’t wake up, and when she does it is usually only for about 15 seconds and then she falls back to sleep. When we went to the beach a couple weeks ago she was able to nap and sleep in a new environment with no trouble. Usually any change will upset her schedule for a few days but that trip didn’t bother her a bit.

She is also starting to relax on my chest and shoulder when she is tired or when she is crying. She is finding comfort from me and lets me soothe her.  She did this for the first time a month ago but now it is her regular habit. It has been over a month since she fought to get away from me when she was crying.

Other changes and more photos:

Some changes are hard to quantify within a specific skill set, but they are important none-the-less. Maggie is more willing to touch soft things, like stuffed animals. She is starting to show interest in books, and has learned how to turn pages. She allows her sister to hold her hand, and reaches out to be held for a few moments by special babysitters and Grandma. She has started going to the nursery at church for the past few Sundays and she is doing very well. She has been willing to happily play, but she is excited when mommy comes back. 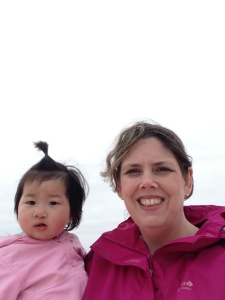 Maggie’s favorite thing at the beach was the strong wind. She finds it exciting!

Maggie still displays amazing flexibility and still sometimes sits with her legs wide apart, but she is gaining lots more tone and strength in her legs, hips, and stomach muscles. She is getting stronger and gaining endurance. 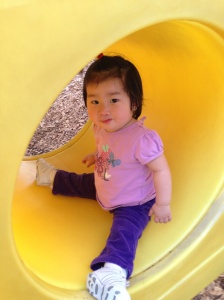 Maggie loves her brothers and her sister. She has a lot of fun in our busy, noisy household. 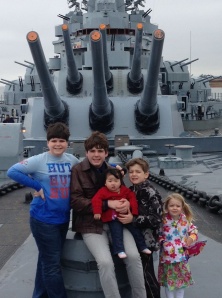 Aboard the USS Alabama with most of her siblings

Maggie was quiet enough to go birding with the boys and I on our recent vacation. She fits right in to our family–her older siblings learned to be quiet and come along for the ride whenever big brothers find a bird they need to chase down for their life lists!

She loves playing chasing games with her big sister and she enjoys being toted around by the boys.

You can also find me blogging here…

January 15, 2013---Dossier authentication begins when documents are sent to secretary of state

January 21, 2013---Dossier documents are returned by secretary of state and sent to Chinese Consulate in Houston, TX for authentication

July 12, 2013---FINALLY showed up on the new database, as having made it through 3 of the 5 steps needed for LOA (made it through translation and review, next step: matching, then LOA)